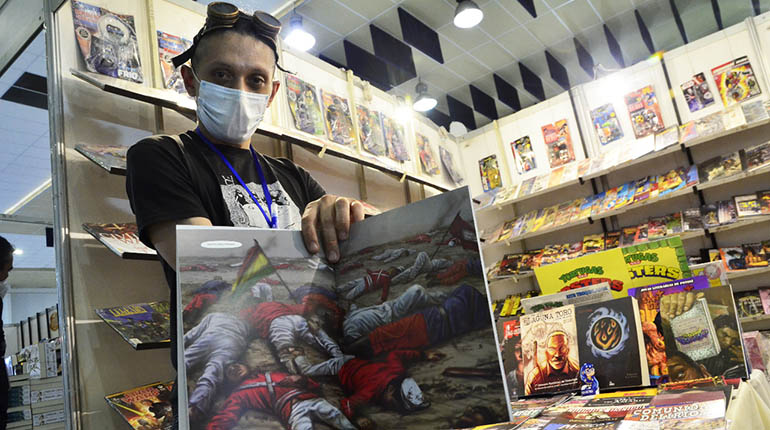 This year, in the 14th version of the Cochabamba International Book Fair, the presence of comics was more evident. However, national production still seeks, by its own means, to spread and promote itself to reach its consumers.

One of the stands with great national material is that of the Pseudogente publishing house, directed by Juan Pablo Cildoz, who promotes, promotes and disseminates the new production of the Bolivian comic.

Cildoz comments that, when the comic began in Bolivia, it “was not narrative; it was more humorous, loose jokes and the most that were put together was two to three vignettes ”. In 1960, Cascabel magazine emerged, which had an attachment to what is known as political satire or mockery. “Since then, the national comic had a somewhat slow construction and recognition unlike the comics of recognized brands.”

The illustrator in La Paz from the Axcido comic book publisher, Rafaela Rada, mentions that Bolivian comics are “young” and there is ignorance in the medium, as it is associated with the stigma that they are literary products for children, although they address various themes.

Rada assures that the comic is one of the best “vehicles to tell stories, to even give a certain social criticism that integrates both literature, graphic design and plastic art at the same time, where one expresses himself a lot as an artist”.

According to Yecid, a Bolivian comic illustrator, the main difficulty in developing it is the lack of knowledge and support from people, authorities and groups, but this does not stop the artists.

Rada believes that one of the main characteristics in the national comic is independent production. “We do not have large investments by the government, institutions, businesses to get our products; most of it we do small publishing houses ”. Cildoz explains that one of the problems is that “the bookstores do not want to consume the material, they always receive it on consignment and if it is not sold they return it to you, that does not happen with the material that they have to buy from Random House.”

Yecid considers that the recession they had during the pandemic was a big problem because the support dropped and, with this, the production of the comic.

The artists, to develop their work, open various ways of visibility. Some choose to produce in publishing houses such as Pseudogente, El Kiosko, Axcido, among others, where a production process goes through: screenwriting, adaptation, vignetting and, finally, drawing. This is a difficult task. “The data collection for a production took us around three years,” says Rafaela.

Another path goes through independent production, considered cheaper, they mainly opt for publication through social media platforms, although they run into problems such as plagiarism.

Yecid affirms that “some publications go viral (…) but when addressing political issues we have received death threats.”

On the subject, Daniela Cebrera Miranda, illustrator, states that “addressing social issues is important, (…) there should be more voices talking about the current situation of people.”

Fairs and conventions are the main free spaces for independent authors to socialize their work.

“We were charged less or were given free spaces (…) which was great because what we earn with our production is not similar to what large stores earn, so we could not compete if we were on the same level ”Yecid comments.

Finally, there are the contests that sometimes make it possible to publish the works.

Many people took the opportunity to start their comic projects and little by little spaces reappeared, such as the Book Fair, which provide support to the different Bolivian artists. The physical producers of comics were reduced over time, but the artistic spirit still survives in the country.